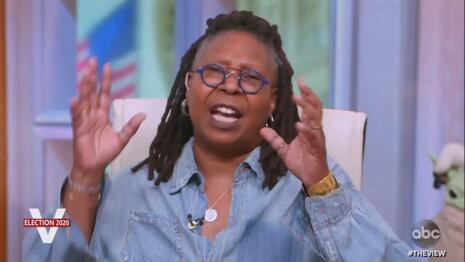 On this week’s enthralling serving of the NewsBusters Podcast, government editor Tim Graham discusses how the women of The View think about themselves to be the heroic individuals who hold Trump from killing democracy.

Who thinks Pleasure Behar is a vital and clever voice everybody wants to listen to? Why would Whoopi Goldberg lecture all of the Trump voters that it’s time for them to “suck it up” the best way that the Hillary voters responded maturely to the 2016 outcomes. Oh, did they?

Tim additionally discusses the calls for for unity and give up from CNN and from Michelle Obama, in addition to the must-read by David Harsanyi analyzing their “unity” shtick.

The visitor this week is Alexander Corridor of MRC’s TechWatch and host of the TechShark show on YouTube. New York Instances tech columnist Kevin Roose has taken the weird stand {that a} story on a conservative web site like Breitbart about voting irregularities can “be factually correct AND…a part of a misinformation marketing campaign geared toward undermining confidence in an election.”

Only for enjoyable, we word that Roose opposes Pretend Information, and but wrote a 2009 e-book on how he pretended to be evangelical Christian scholar at Liberty College for a “sinner’s semester.” Get pleasure from beneath or wherever you hearken to your podcasts.

Is That ‘Be Greatest?’ CNN Morning Crew Mocks Melania For Not Revealing Vaccination